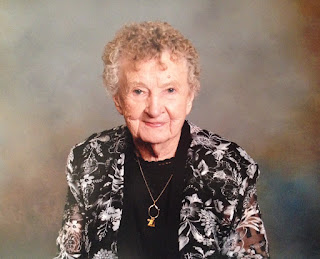 Martha Louella Bates Jackson passed in her sleep at her home in Suwanee, Georgia on September 15, 2015. She was laid to rest at Arlington Memorial Park in Sandy Springs on Friday, September 18, 2015. Born July 11, 1916, Martha was 99 years old at the time of her death.

The following was read at her funeral, which was officiated by Reverend James Hicks. James visited Martha every month for five years while she was in hospice. During that time, her daughters Doris Mauldin and Dorothy Cole cared for her in Doris and Kenneth's home.

On Sundays at the Oak Road house, Martha's grandkids and great-grandkids were running in and out of the house, playing ball in the front yard and trying to keep it out of the garden while waiting to be called to the table for a delicious Southern-cooked meal. Nanny made some of the best biscuits and gravy, peach cobbler, fried chicken, and homemade dill pickles you ever tasted.


Anyone who entered Nanny's house was treated as family. One would always be offered something to eat and drink when they came over. The matriarch of five generations, she loved every one of her five children, her 12 grandchildren, her 35 great-grandchildren, her 20 great-great-grandchildren. Their spouses were loved as if they were her own kids. Her unconditional love made our family a safe place where everyone's needs were met.

In her middle years, she kept her grandkids while their parents worked. Her example as an excellent housekeeper, Christian, and nurturing caregiver took hold in their hearts and lives. Martha took care of a garden including the canning and freezing of the harvested food and mowing her own lawn while caring for her husband who ailed with emphysema for many years. She lived alone for nearly ten years after his death and helped tend to her great-grandkids who lived next door--there was always a milkshake ready when they got off the bus at her house.

Giving up her independence and moving in with her daughter and son-in-law was a difficult decision she made in 1998. But she quickly adjusted and the Sunday family dinners moved with her to Doris and Kenneth's house. She participated in meal preparation and housekeeping until the day she fell and broke her hip and shoulder while putting up groceries in the kitchen. Her battle with pain, surgery, and several close calls with death robbed her of the active lifestyle she had always enjoyed. As a loving nurturer, she never wanted to be a burden to her family. As her worst nightmare unfolded, she did not give up her faith. While sitting in the chair that she had been hoisted to, she would sing hymns as she dusted the frames that contained the photos of her beloved family.

Her love remained strong even as her body became a prisoner of her bed and dementia took its toll on her mind. The love her family had for her became more evident. She would not have lived to celebrate her 99th birthday if it had not been for the excellent non-stop elder care her daughters provided.

We will all miss Nanny, but we also know she is in a better place. She has joined her parents, her siblings, her husband, two of her children, as well as Jesus and the angels in heaven."
~~~~~~~~~~~

Feel no guilt in laughter, she’d know how much you care. Feel no sorrow in a smile that she is not here to share. You cannot grieve forever; she would not want you to.

She’d hope that you could carry on the way you always do. So, talk about the good times and the way you showed you cared, the days you spent together, all the happiness you shared.

Let memories surround you, a word someone may say will suddenly recapture a time, an hour, a day, that brings her back as clearly as though she were still here, and fills you with the feeling that she is always near. For if you keep those moments, you will never be apart And she will live forever locked safely within your heart.

As for grief, you'll find it comes in waves. When the ship is first wrecked, you're drowning, with wreckage all around you. Everything floating around you reminds you of the beauty and the magnificence of the ship that was, and is no more. And all you can do is float. You find some piece of the wreckage and you hang on for a while. Maybe it's some physical thing. Maybe it's a happy memory or a photograph. Maybe it's a person who is also floating. For a while, all you can do is float. Stay alive.

In the beginning, the waves are 100 feet tall and crash over you without mercy. They come 10 seconds apart and don't even give you time to catch your breath. All you can do is hang on and float. After a while, maybe weeks, maybe months, you'll find the waves are still 100 feet tall, but they come further apart. When they come, they still crash all over you and wipe you out. But in between, you can breathe, you can function. You never know what's going to trigger the grief. It might be a song, a picture, a street intersection, the smell of a cup of coffee. It can be just about anything...and the wave comes crashing. But in between waves, there is life.

Somewhere down the line, and it's different for everybody, you find that the waves are only 80 feet tall. Or 50 feet tall. And while they still come, they come further apart. You can see them coming. An anniversary, a birthday, or Christmas. You can see it coming, for the most part, and prepare yourself. And when it washes over you, you know that somehow you will, again, come out the other side. Soaking wet, sputtering, still hanging on to some tiny piece of the wreckage, but you'll come out.
he waves never stop coming, and somehow you don't really want them to. But you learn that you'll survive them. And other waves will come. And you'll survive them too.

These songs were sang at the funeral by her granddaughters, Carla (Parker) Buck and Yvonne (Mauldin) Perry. The congregation joined in on several of the familiar hymns.

Oh, Come, Angel Band
Amazing Grace
Oh, How I Love Jesus
In the Sweet By and By