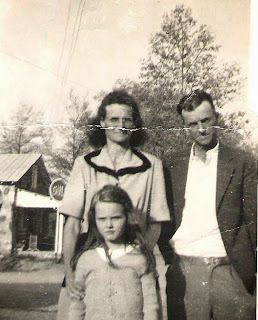 This is a photograph of J.B. & Lois Christine Sims Bates and their daughter Jenny standing in front of  Tommy Garrett's old Rock Store with the old Gulf sign.  The store was at the corner of Highway 92 and Sandy Plains Rd, just inside Cobb County in 1949.  It was ran by Mr. Garrett's wife, Ms. Lu, her daughter, son-in-law Eugene and Edith Garrett Erwin, after he passed away. The land was later sold in the sixties and the store was replaced by a Kentucky Fried Chicken and a shopping center with a Public. The Public shopping center took three of the Garrett's rental houses.
Posted by Unknown at 5:00 AM