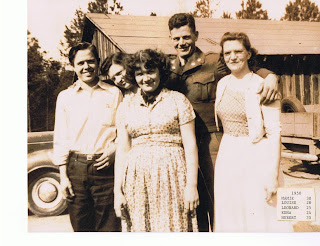 The five children of Johnny and Viola Pruitt Smith are photographed above.  Lenard, Mamie, Edna, Hubert in uniform and Louise.  Johnny was the only son of Newton Alexander and Savannah Bates Smith.  Johnny was a peddler throughout Cherokee and Cobb counties.  He drove a truck full of fresh vegetables and fruit.  He weighed them on a hanging scale from the truck. He was known by the kids as Uncle Johnny. He always had plenty of bananas and gave the kids one every time he came. He did not know his gift would make a banana sandwich their only lunch that day. Lenard followed in his dad's footsteps.  He had a roadside market near Roswell, Georgia. Viola had a cheerful spirit and everyone loved her. She was the sister of Frances Pruitt who married Mary Bates, daughter of Lem and Lillie Smith Bates.  Lee Pruitt married Johnny's sister, Lessie Smith.
Posted by Unknown at 6:00 AM