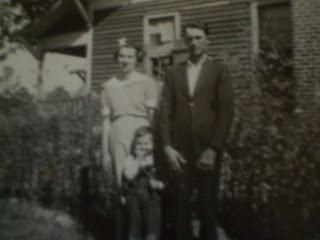 Vada Bates was the daughter of Lem and Lillie Smith Bates. Vada married Tommy Grogan. This is a photograph of Vada with Tommy Grogan and their son, Vernie. This picture was taken at the Old Grogan Homestead located on Old Alabama Road now known as Wiley Bridge Road in Woodstock, Georgia.

Tommy Grogan is the son of Charlie and Leavy Grogan who owned this farm. Charlie died at age 42, leaving Leavy with seven small children. She sold the farm off in pieces until it was all gone trying to support the children. Many of the children were raised by relatives who helped out as much as they could.