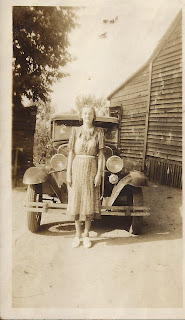 This is a photo of Ethel Bates.  She was born on February 27, 1923.  Ethel is the daughter of Lem and Lillie Smith Bates.  She married James Elvin Gravitt.  James is the brother of Mildred Bates who married Bethel Bates her twin. Ethel could play the piano and a guitar, even though she never took a lesson. She played for churches from the thirties to the sixties.  Ethel could cook like her mother Lillie Bates. Eating at her house was like eating at Grandma's. Ethel died September 6, 2010. (Picture was made before she married in the late thirties.)
Posted by Unknown at 6:00 AM