This is presently what is left of a shanty where slaves once lived in the 1800s. This was part of a plantation owned by Dr. Jesse Green on Flat Bottom Road in Ball Ground, Georgia. In 1850, the census showed him living in Missouri. Did he go there for slaves? He was back in Ball Ground by1860. 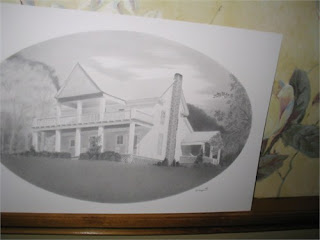 This reprint was originally a hand-painted portrait of the Green Plantation during slavery days. 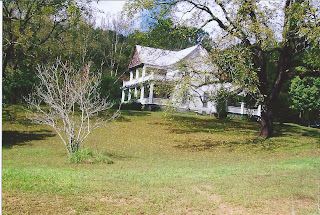 Here is how the house on Green Plantation looks today. These photos were taken in 2008. 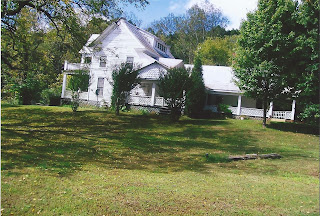 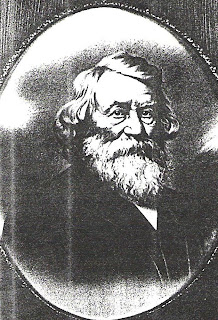 Dr. Jesse Lovask Green born in North Carolina 1802, came to Cherokee County in 1824 and purchased land along the Etowah River among the Cherokee Indians. During the 1800s and until his death in 1875, he owned a plantation on Flat Bottom Road in Ball Ground, Georgia. Doctor Green used Indian wisdom and herbs as part of his patient treatments.

Dr. Green was Jenny Bates Meadow-Sauls' great-great-grandfather on her mother Lois's side of the family. (Lois Sims was the wife of  J.B. Bates.) Lois's grandmother Martha (Matt) Green Rich (1866-1940) was the daughter of Dr. Green. Martha Green married James Riley Rich, who came over from Ireland during the potato famine in 1850. Martha and James donated the land and helped brick the original Old Noonday Church, traveling to and from Atlanta hauling brick in a wagon. They were the first people to be buried in the Old Noonday Cemetery in back of the church on Hwy 5 in Woodstock, Georgia.

Dr. Green's first wife Cynthia Dupoi may have been an Indian. We have no census or other information about her. There are no children on record for this marriage.

Dr. Green and his wives and several of his children are buried in the family plot on the property known as the Green Family Cemetery across the road from the house on Flat Bottom Road in Ball Ground, Ga.
Posted by Unknown at 8:51 AM